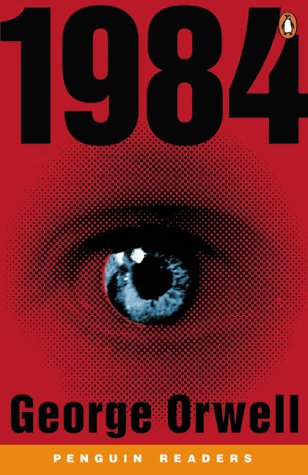 Winston Smith is a rebel- but then to even think about doing anything against the party is a crime- thoughtcrime. Yet, he dares to step out of line and even starts a diary! He meets a girl- Julia and they fall in love- again something which would get them killed or worse. In the end they do get caught and are put through horrifying torture. The purpose as O’Brien says is not to merely kill the rebels, but to make them accept and love the party and Big Brother before they are finally shot.

The idea of Big Brother(the iconic leader) is based on Joseph Stalin. But unlike the latter, we do not know if he is a living person. Yet, Big Brother is everywhere, he listens to everything to you say, he watches everything you do(somewhat like God?). The world is constantly at war and though the statistics say otherwise, people’s ration are decreased almost every week. There are four ministries which rule Oceania(the world has three super powers- Oceania, Eurasia and Eastasia), i.e. Ministry of Love, Ministry of Peace, Ministry of Truth and Ministry of Plenty, which deal with controlling people though constant monitoring and torture, war,  falsification and propaganda and controlling rations respectively.

You can feel a sense of despair through out the book, not only is it palpable, it starts affecting you. the arguments and ideas are driven through with pain and anguish- what if the world turns out to be like this? Or are we really heading to a world like this? Maybe not, hopefully.

The book flows much like a saw does through wood, slicing and making you question the motives of the world you live in. While it may seem the author is nihilistic- there is enough of salt in there to see what he sees. If in the last 60 or so years(since the book was written), the world hasn’t moved one bit of the knife-edge in terms of falling into a world of hatred and war, then surely there is something we need to think about.

Even in an age of democracy- you can’t but help draw parallels to the present day situation. The picture is no way pretty. In the end you are left with a damning silence, wondering what is reality. The characters are almost alive, in fact you believe they are real. You live every second of the book and know through out what awaits you. It doesn’t matter, what you know, all that matters is what ‘they’ think you have to know. 2+2=5.

A must read book, but be prepared to answer questions which you never thought you would ask yourself. There is no happy ending- there is nothing that makes you smile anywhere in the book. Big Brother is watching you.

You are currently reading 1984 by GEORGE ORWELL(book review) at the light shines the brightest.